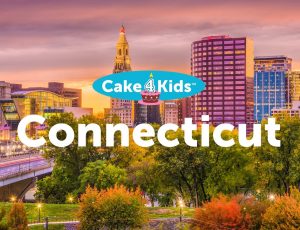 The young women in NAFI Connecticut’s residential programs at the Touchstone Campus in Litchfield are writing a recipe for finding new sweetness in life by brightening the lives of other youth facing challenges.

As part of NAFI CT’s partnership with the new Connecticut chapter of the national nonprofit Cake4Kids, the young women at Touchstone hope to transition from being recipients of Cake4Kids sweet deliveries to joining the corps of volunteer bakers who make cakes, cupcakes, and more for youth in foster care, group homes and other settings.

Touchstone, where services address the unique needs of adolescent females involved in the juvenile justice and child welfare systems, is home to the Touchstone Program and the DBT Group Home (Dialectical Behavioral Therapy) program.

“We had a student council meeting and introduced Cake4Kids to the girls,” explained Freddy Mendez, the Program Director for Touchstone, which currently has eight young women.

They requested Thanksgiving-themed cupcakes from the Cake4Kids Connecticut chapter, which officially launched in mid-November.

“The kids loved the cupcakes,” Freddy said, describing the long-term goal of turning the equation around to have the young women become Cake4Kids bakers as part a baking group activity at Touchstone.

“They’re really excited about that,” Freddy said, adding of the partnership between NAFI and Cake4Kids, “It was really sweet that they did this. This is awesome.”

Cake4Kids was founded in 2010 to provide free birthday cakes to foster children and at-risk youth in the San Francisco Bay Area. What began as a grassroots efforts with a few volunteers has grown tremendously and now includes chapters in seven states and Washington, D.C., including eight chapters in California. 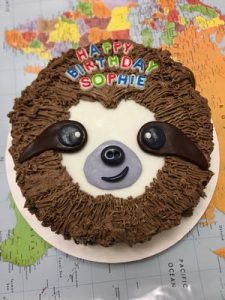 The Cake4Kids recipe is simple, the results are delicious, and the pay-it-forward positive energy that comes from youth who face challenges knowing someone cares enough to bake a personalized cake for them is priceless.

Launched by the late Libby Gruender after she read story about a girl in foster care in the Midwest receiving her first birthday cake, Cake4Kids partners with agencies that support at-risk or underserved youth in settings that also include homeless shelters, transitional and low income housing, domestic violence or human trafficking shelters, and substance abuse programs.

Each chapter of Cake4Kids has a community ambassador who does all the local groundwork, finds partners, recruits volunteer bakers, and oversees orientation efforts before the baking begins.

“All of our bakers are volunteer at-home bakers and they range in skill levels, so it can go from a nice looking homemade cake all the way up to ‘I can’t believe that’s a cake,’” explained Alison Bakewell, Director of Operations for Cake4Kids.

“Many of these ladies and gentlemen are hobby bakers and they are amazingly talented, and we do have some professional bakers who are giving back among our 3,200 volunteers,” she said.

Jaclyn Dougan, a Family Advocate and Home Visitor for Middlesex Health, is the community ambassador for the Connecticut chapter.

“When she came across Cake4Kids, she couldn’t pass up the opportunity to get involved by pairing her passion for helping children and families with her favorite hobby,” said a Facebook post announcing the chapter.

It was a specific experience that began Jaclyn’s journey toward establishing a Cake4Kids chapter. At Middlesex Health she was working with a family experiencing difficulties and unable to afford a cake for a child’s upcoming birthday.

She began looking for resources to help in Connecticut, found Cake4Kids in California, and reached out to Julie Eades, the organization’s executive director, about a year ago.

The Connecticut’s chapter’s official first orientation was Nov. 12, and it’s already a thriving effort with 21 volunteer bakers on board and more reaching out to join.

“We have made quite a few cakes,” Jaclyn said, noting that the chapter has 12 cake requests for Dec. 23, and stressing that there are many other supporting roles for potential volunteers who love what Cake4Kids is doing but don’t bake.

Watch the NBC Connecticut video on the new Cake4Kids chapter 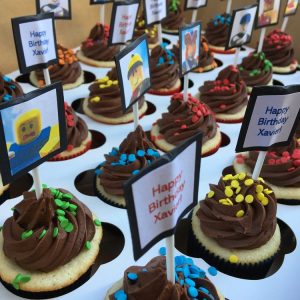 Requests for cakes come in from the partners of each Cake4Kids chapter, which in Connecticut are NAFI CT and the Compass Youth Collaborative so far, as well as from other agencies and service providers.

“They put in a request for the youth, specifying a cake, cupcakes, cookie bars or brownies, as well as flavor and theme, etc.,” Alison explained. The request is posted on the chapter’s portal for the volunteers to review and see who wants the assignment.

When the cakes get delivered, that’s when the magic happens.

“It’s really more than just a birthday cake,” Alison said. “These kids have had a lot of challenges in their lives. A lot of times people let them down. Foster kids can be moved around. They just don’t have the best start in their lives. They can’t believe that someone who doesn’t even know them has taken time out of their day to make them a birthday cake. It boosts their confidence.”

“The thing we really want people to know is we’re making an impact on the youth by showing them there’s someone who cares,” Alison added, noting that Cake4Kids also provides a boost for caseworkers. “When they say I’m bringing a cake and show up with it and it’s an awesome cake, it builds trusts. So when they have other issues to work on it’s a lot easier.”

“There’s one more benefit, and I’m saying it as a baker. It feels amazing to drop off a cake and know that you’re going to make a child’s day extra special,” Alison said.

“This March, right before we had to shut down for COVID, we delivered our 20,000th cake,” Alison said. “December will be biggest month ever, over 900 cakes, even though we’re only operating at about 70 percent because of COVID. At normal pace, we would have made 7,000 cakes this year.”

For more information on Cake4Kids Connecticut chapter, see the website, and explore opportunities to volunteer.


Special education schools & programs that address all areas of a child’s growth simultaneously for long-term change.


Alternative services based on peer empowerment, group work, accountability for actions and recognition of achievement.